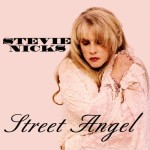 Street Angel is Stevie Nicks’ fifth solo album, her first since The Other Side of the Mirror in 1989. It contains 13 tracks, including the singles “Maybe Love Will Change Your Mind” and “Blue Denim.” Stevie dedicated the album her niece Jessica James Nicks, “the next generation.”

Stevie began recording Street Angel with English producer Glyn Johns in the summer of 1992. The sessions were marred by Stevie’s addiction to the tranquilizer Klonopin and the antidepressant Prozac, which according to Stevie, had affected the quality of her singing and songwriting. On December 12, 1993, Stevie sought treatment for the addiction, staying in a Southern California rehabilitation program for 47 days.

Following treatment, Stevie listened to the completed Street Angel recording again but was disappointed with the production. Although producer Glyn Johns had completed the album, Stevie hired another producer, Thom Panunzio, to re-mix the tracks. (Johns’ production work on the album was not credited in the Street Angel liner notes.) Stevie asked guitarists Waddy Wachtel and Michael Campbell and percussionist Peter Michael to add parts that she felt were missing from the original tracks.

Overwhelmed by the production overhaul, Stevie chose not to re-record most of her vocals, though she later admitted that they were another glaring problem with the album. “I should have gone back in and really worked with the album, with the vocals,” she told Off the Record host Mary Turner in 1994. “I guess that was the last thing that I knew was wrong with it. And after being in two months trying to fix everything that I thought was wrong about the music and the mixes, it was almost like, you just need to let this go.”

Modern Records planned to release the revamped Street Angel on Tuesday, May 3, 1994, but delayed it another month to Tuesday, June 7, 1994. The album debuted at No. 45 on the Billboard 200 Albums chart and spawned the single “Maybe Love Will Change Your Mind,” which reached No. 57 on the Billboard Hot 100 Singles chart.

For the proposed 1993 Street Angel release, Modern Records had intended “Unconditional Love” to be the lead single, and “Listen to the Rain” and “Blue Denim” to be subsequent singles.

Stevie launched a North American tour to support the release. For the first time in her solo touring career, Stevie traveled to concert venues in a tour bus.

Despite Stevie’s concerted efforts to improve Street Angel, the album remains her least favorite recording even though it received generally favorable reviews from music critics.

*It’s unknown whether Stevie actually recorded “I Call You Missing” for Street Angel, as indicated on the 1993 Modern Record press release.

The 1993 versions of “Blue Denim,” “Destiny,” and “Rose Garden” were later released on The Enchanted Works of Stevie Nicks (1998).

Below is a selection of tracks in their original arrangements from the proposed 1993 Street Angel album.

Westwood One Radio Network (1994). Stevie Nicks Off the Record with Mary Turner.