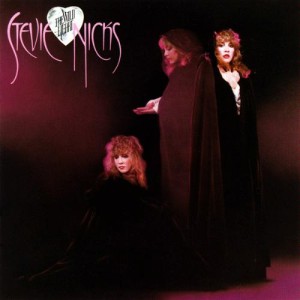 Seldom has Stevie Nicks been in better voice than on The Wild Heart. Her distinctive lower-range growl has broadened and strengthened considerably; it may not be a bluesmama instrument, but it carries some emotional oomph when it gets cranked up. The Wild Heart boasts one of the best producers in the business in Jimmy Iovine (reprising his yeoman board chores on Bella Donna), and at least two of rock & roll’s most valuable players, guitarist Waddy Wachtel and keyboardist Roy Bittan. And Nicks embarks on her second solo LP with some intriguing personal history to relate: she’s a married woman now, wedded to her best friend’s widower, stepmother to an infant daughter.

So the question is, how did it all turn out so badly? Let’s not mince words: much of The Wild Heart is an outright catastrophe, a one-two punch of cracked-cookie lyrics and stunningly pedestrian music. It’s hard to believe that the woman nominally responsible for such fine pieces of songcraft as “I Don’t Want to Know” or even “Edge of Seventeen” could have concocted the inchoate ramblings that pervade this record. Stanzas don’t hang together, and choruses verge on the utterly meaningless: “If anyone falls in love/Somewhere, twilight, dreamtime, somewhere/In the back of your mind/If anyone falls,” offers one particularly pellucid example in “If Anyone Falls.” “There is a gate/It can be guarded/Well, it is not heaven/It has a garden/So to the red rose goes the passion” begins the inexplicable “Gate and Garden.” Emotions flit through these songs like Hades’ shades–shapeless forms, unable to escape. In “Stand Back,” she sings, “No one knows/How I feel/What I say/Unless you read between my lines.” Well, whose fault is that?

The pro forma L.A. rock that accompanies – rather, encases – these sentiments only makes matters worse. It neither creates a structure that could codify Nicks’ wacked-out world nor enhances its ethereal, unfinished quality. Sandy Stewart lurches on her synthesizer as if it were Billy Swan’s organ, when she should be using the instrument to breathe life into Nicks’ phantasms with shimmering, spacey textures. The lockstep rigidity of the tracks blunts the idiosyncratic dash of Wachtel and Bittan and stomps on Nicks’ fragile visions. “Enchanted” could make a nifty Warren Zevon song musically, but behind Stevie’s tinkerbell tales and arrhythmic count-off, it sounds ludicrous. Only Mick Fleetwood’s deft drum accents on “Sable in Blond” bring any cohesion to The Wild Heart.

What went wrong? Part of the problem may have to do with Nicks’ oft-expressed love of fairy tales. Such stories may enchant us because of their distilled emotional quality: their ritualized time sequences (“…And on the seventh day”) and abstract kingdoms conjure up a richly romantic world, free of the mundanities of our own existence. But Nicks gets distracted by the archetypal trappings – doves, gardens, beasts with hearts o’gold–and misses the emotional core. As a result, her lyrics are awash in setting but curiously clumsy in matters of the heart. “Do I love you?” she asks in “Gate and Garden.” “Well, I always did.” Clunk. There’s no dance of souls here, nothing to lure us into caring. Nicks’ romances, as in “Beauty and the Beast,” are pure self-realization: “I never doubted your beauty/I’ve changed.”

It takes Tom Petty to coax Stevie out of the dusky bogs and bushy fens. His heart-tugging “I Will Run to You” may not have the angry fire of their Bella Donna duet, “Stop Draggin’ My Heart Around,” but it does snap side two to life. “I will run to you/Down whatever road you choose,” croon the pair in chilling harmony, and that straightforward sentence says more about love and experience than any of Nicks’ dizzy verse.

It’s simple to mug a mystic, and Nicks’ voyages into the ozone do make her an easy target. But mysticism doesn’t obviate the need for clarity, rigor, structure. In fact, it makes them all the more important, so that those of us who look askance at crystal visions can partake along with the true believers. And if her lyrics are going to have the open-ended quality they have here, Nicks needs eerie, on-the-edge music to complement them (the snaky grace of “Gold Dust Woman” comes to mind). Hers is a heady muse, and one hopes The Wild Heart will just be a brief slipup. Too bad no one told her early on, but as she sings in “Nightbird,” “Sometimes I am surrounded by too much love.”