“And a memory is all that is left for you now…” And what memories they were! 2016 was packed with big moments for Stevie Nicks, which likely maxed out the pages of her journals! From releasing new music to appearing on major TV shows to performing sellout concerts across the country, it was another busy and productive year for Stevie. So, Ladies and Gentlemen, let’s relive some of them now…with the occasional sassy commentary…our Top 10 Stevie Nicks Moments of 2016!

In July, Fleetwood Mac had the opportunity to send off the great Vin Scully with a special concert at the Blue Diamond Gala. Scully, veteran sportscaster for the Los Angeles Dodgers, retired from broadcasting after 67 seasons with the Dodgers’ organization. Fleetwood Mac band members met Scully before the show and later treated him and the star-studded spectacle (Matthew McConaughey, John Mayer, Sylvester Stallone, Arsenio Hall, and Will Forte to name a few) to their recent “On With the Show” concert set list.

The Moment: Stevie dedicated “Landslide” to Scully and joked “We’re right behind you, Mr. Scully” (referring to retirement). The good-humored Scully returned the quip, saying “I wish I could sing with Fleetwood Mac, but I can’t.”

In 1979, Fleetwood Mac famously recorded the music video for the single “Tusk” at Dodger Stadium, alongside the USC Marching Band.

In February, Stevie helped kick off Lady Antebellum singer Charles Kelley’s solo career by lending her voice to his cover of Tom Petty’s “Southern Accents.” Stevie naturally jumped at the chance to sing along to her favorite songwriter’s track…and spend a lot of time with a tall, young, handsome, strapping, southern gent (he’s married, Stevie). For Kelley, it was an opportunity to work with a rock legend and understand her creative process. “She was talking about picking takes and how it’s not always about the perfect note, it’s about the emotion, She has a thing and she knows what her thing is. And she does it so well,” Kelley told Rolling Stone back in July.

The Moment: Stevie sings the lyric “There’s a dream I keep having / Where my mama comes to me.” You can’t help but get a wee bit weepy-eyed to think that Stevie was probably thinking about her own mama, the brilliant Barbara Nicks, right up there in heaven.

In June, Stevie Nicks added her name to Billboard magazine’s open letter, demanding Congress to pass stricter gun regulations. More than 180 musicians and music executives signed the letter, which appeared in this July 2nd issue of Billboard with a headline that read, “Stop Gun Violence Now.” The letter emerged in response to the June 11th gun violence at an Orlando LGBT nightclub, where a shooter killed 49 people. Stevie addressed the Orlando tragedy in a thoughtful message posted to her official sites.

The Moment: Stevie shared a rare demo of “Touched by an Angel” in memory of the victims.

Stevie briefly stepped into the political arena to voice her support for Democratic Party nominee Hillary Clinton in this year’s presidential election. “My heart is with Hillary,” she told Us Magazine in September. Having long advocated for more leading women in music, Stevie naturally supported the proposition of Clinton being the first female president. Although her candidate didn’t win the election, Stevie kept things positive and classy, telling the audience at her November 10th show in Charlotte, NC, “Take a deep breath, this is a place of happiness and love.” So obviously, there will be no invitation to sing “Landslide” at Hillary’s inaugural event…Stevie for 2020?

The Moment: When she also told the New York Times, “Of course, I’m for HIllary!” In October, Stevie made two notable appearances on two major talk shows, in advance of her 24 Karat Gold Tour. Stevie gave an exciting preview of the tour on The Late Late Show with James Corden, performing “Leather and Lace,” her 1981 Top 5 duet with Don Henley. She sang it much like the all-girl rendition from 1981’s White Winged Dove Tour. At the end of the performance, the cheeky James Corden immediately bowed to Stevie’s feet and frantically kissed her boots, which had Stevie in stitches. Also in the show, Stevie debuted the newest member of her family, Lily, an adorable baby Yorkie. (Her “life partner” Sulamith passed away earlier this year.)

Leather and Lace (The Late Late Show with James Corden)

Stevie continued to reach new audiences by hitting the prime-time TV circuit. Her Season 12 appearance on the September 14th America’s Got Talent (AGT) finale was a ratings winner, with a 49% percent jump in viewership from the previous year’s finale, according to Nielsen ratings. That 12-year-old prodigy Grace VanderWaal probably had something to do with this, too. Stevie performed Fleetwood Mac’s perennial classic “Landslide,” sharing her music with yet another generation, another cross-section of music listeners; even Simon looked impressed.

The Moment: At the end of the performance, AGT host Nick Cannon affirmed to the world that Stevie Nicks is not just a “Rock Goddess” or a “Rock Icon” or the “High Priestess of Rock and Roll” or some other deflecting title, but none other than…THE QUEEN OF ROCK, bitches! Justice has been served.

Stevie crashed the April 26th evening performance of School of Rock musical during the show’s curtain call. The stunned audience gave Stevie a standing ovation when she magically appeared. She then delivered a lively rendition of “Rhiannon,” twirling in long, flowy sleeves, which cast a heavenly spell on the crowd. (There was also a two-drink minimum.) Afterwards, Stevie posed with the band and had nothing but glowing praise for her talented young cast musicians. Stevie’s appearance was part of the Broadway Cares’ Easter Bonnet Competition, an annual fundraiser for HIV/AIDS service organizations, where she performed “Rhiannon” with the little prodigies for guests, who — once again — had no idea she would be there! Weddings, birthday parties, Bar Mitzvahs, the lady does it all! The Grim Reaper was especially cruel to the music industry in 2016, taking away beloved rock stars — cultural icons to many — far too soon. Notable deaths included David Bowie, Glen Frey, Natalie Cole, George Michael, and Prince, among others, who graced this world with their talent and tunes. Though Stevie’s friendship and “Stand Back” collaboration with Prince are well-documented, she offered both visual and spoken tributes to him during her 24 Karat Gold Tour. Her connection to guitarist Glen Frey dates back to the mid-’70s when she and Frey’s band The Eagles spent key years together in the Southern California rock scene. Stevie reflected on both Glen Frey and Prince’s sudden deaths, sharing moving thoughts about her musical contemporaries on her social media channels.

The Moment: Reading those crushing words…”brokenhearted,” “seeing through my tears,” “my friend is gone.”

For longtime collectors, it was Stevie Nicks and Fleetwood Mac Christmas, so to speak, when they were treated to a bevy of reissues and deluxe editions throughout the year. Still overjoyed from last December’s incredible Tusk reissue, fans continued to feel the love with the expanded Mirage package released in September. Three words: “Gypsy” Video Version.

But the bigger treat for Stevie Nicks fans was yet to come when news of deluxe releases for both Bella Donna and The Wild Heart dropped. With remastered sound, Bella Donna featured two additional discs; one disc with Bella Donna-era demos and outtakes and the second disc including Stevie’s 1981 Wiltern Theater show in Los Angeles. The Wild Heart featured one additional disc of session material and outtakes, including a rare demo for “Sorcerer.”

Of course, there was an even bigger surprise waiting in the wings… 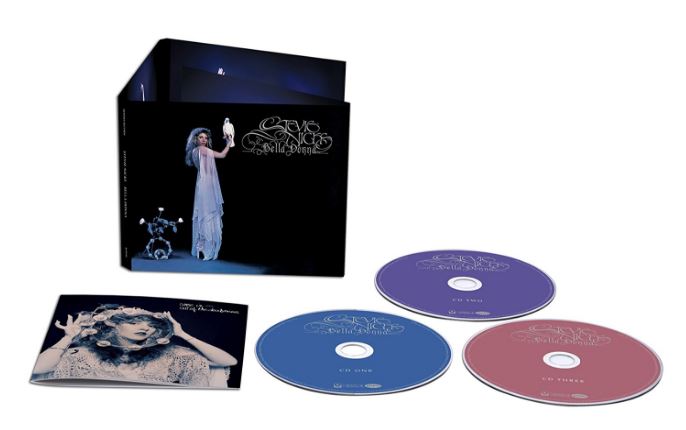 Stevie’s surprise 24 Karat Gold Tour (accompanied by Chrissie Hynde and The Pretenders) was undoubtedly the highlight of the year for most fans. But it wasn’t just any tour, or the “same ol’ Stevie Nicks show,” as Stevie put it. She decided it was finally time to shake up her unchanging concert set list and perform a wider variety of songs from her vast 43-year-career catalog. She did not disappoint, pulling out songs from the “dark, gothic trunk of magical and mystical things.” Among those treasures were beloved album tracks “Bella Donna” and “Wild Heart”; newly re-recorded demos “Starshine” and “Moonlight (A Vampire’s Dream)”; and the elusive and oldest song in the set list, 1973 track “Crying in the Night.” For casual fans and beer runners, there were familiar favorites, such as “Gypsy,” “Gold Dust Woman,” “Rhiannon” and “Landslide,” to help pass the time. The musical cauldron of variety was a smashing success, as fans and critics alike responded with praise and their pocketbooks: Stevie sold out many shows in key markets, such as Madison Square Garden in New York and The Forum in Los Angeles. For 2017, 20 additional have been added so far to the bill, with an Australian leg in the works.

Top Moments: 1) Consulting her indispensable FitBit; 2) encouraging dreamers to reach out into “The Belladonna Starland” and 3) accidentally dropping the F-bomb at her Washington, D.C. show.