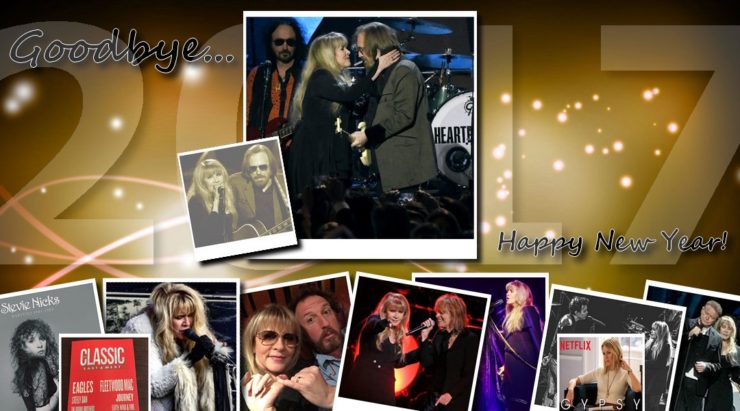 In 2017, Stevie did a little bit of everything she’s been known for: touring, recording, celebrating, and even performing together with her lovably dysfunctional band Fleetwood Mac.

But the productive year winded down on a somber note, as Stevie lost her dear friend, collaborator, and musical inspiration of nearly 40 years when rock legend Tom Petty suddenly passed away in October at the age of 66. It’s hard to imagine what she could be going through, as she had not said much about Tom’s death. But on the first night of the 24 Karat Gold tour in Melbourne, Australia,  she told the crowd,“You got me through this so I feel I can go on and finish (the tour). So I thank you, Tom Petty thanks you.”

Stevie has demonstrated time and time again that she is a survivor with incredible resiliency. She has always overcome hardship and tragedy while maintaining her heart of gold. So it’s no surprise that she remains a source of inspiration and pride for fans around the world. Our New Year’s resolution should be to follow her lead!

In October, news of rock legend Tom Petty’s untimely death stunned the music world. For Stevie, it meant the loss of her dear friend and musical partner of more than 40 years. In those years, the pair recorded incredible duets like “Insider,” “I Will Run to You,” “Needles and Pins,” and Stevie’s biggest solo hit “Stop Draggin’ My Heart Around.”

The famous pair was fortunate enough to perform together twice in 2017; first at the MusiCares pre-Grammy gala in February and one last time at Tom’s 40th Anniversary show at Hyde Park in July. At both gigs, Stevie and Tom performed their signature duet “Stop Draggin’ My Heart Around.”

Cheekily, The Heartbreakers never allowed a woman to be in the band, but in 2006, Tom Petty formally bestowed Stevie with the honor of the being the first and only female Heartbreaker.

“In 2006, I did 27 shows with him,” Stevie told Rolling Stone in 2010. “Tom made me a little platinum sheriff’s badge that had 24-karat gold and diamonds across the top and said ‘To Our Honorary Heartbreaker, Stevie Nicks.’ On the back it says ‘To the Only Girl in Our Band.’ I keep it on my black velvet top hat. It goes with me everywhere. It’s probably the most beautiful piece of jewelry a man has ever given me, ever.”

In October 2016, Stevie kicked off what was supposed to be a 27-city tour of the U.S. of Canada, in support of her eighth solo album 24 Karat Gold: Songs from the Vault. But due to strong ticket sales in major markets — including sellouts at Madison Square Garden in New York on December 1 and The Forum in Los Angeles on December 18 — the tour was extended and off to the races!

As the tour progressed, Stevie told long stories behind her “gothic trunk of lost songs,” to the joy — or frustration — of fans, depending on their desired concert experience. She was determined not to perform “the same show you’ve probably seen a million times.”

The tour was a formidable success, notably with bad-ass Chrissie Hynde and The Pretenders on the bill. Together, Stevie and Chrissie demonstrated some fierce girl-power moments, commanding the stage during their take on “Stop Draggin’ My Heart Around.”

After 67 shows in four countries over a period of 13 months, Stevie Nicks’ 24 Karat Gold Tour — the longest and most successful one of her 36-year solo career — came to a close on November 24 in Dunedin, New Zealand. The tour grossed more than $60 million.

3. Stevie records some great new music for the masses.

Early in the year, Stevie recorded “Beautiful People Beautiful Problems” with singer-songwriter Lana Del Rey for Lana’s album Lust for Life. The two were connected by Rick Nowels, who produced Lust for Life and most of Stevie’s 1985 album Rock a Little. Rick and Stevie go back to their early days in Southern California in the 1960s. Rick often credits Stevie for his first big hit, “I Can’t Wait” (US #16), which he co-wrote with Stevie.

With Stevie’s help, Lust for Life debuted at No. 1 on the Billboard Hot 200 Albums chart and went on to get a Grammy nomination for Best Pop Vocal Album. Just beautiful!

Stevie also recorded “Your Hand I Will Never Let It Go” for the film The Book of Henry. The track was co-written by singer-songwriter Ryan Miller, the lead singer and guitarist for the alternative rock band Guster. Musically, the song is the most experimental (some would say weirdest) one she’s ever recorded, but get this… It’s now in the running for an Academy Award (Best Original Song), albeit a dark horse candidate. Even though the prize goes to the songwriter (i.e. not Stevie), the idea of seeing Stevie perform on the Oscars sounds quite appealing, and the potential to be one hell of a performance if we do say so ourselves. That fantasy, we will never let it go!

4. Stevie records a new version of ‘Gypsy’ for a really strange Netflix show.

Finally, Stevie recorded a new version of the Fleetwood Mac’s 1982 hit single “Gypsy” for the bizarre Netflix psychological thriller of the same name. How Stevie’s warm and fuzzy song about childhood nostalgia related to the show — about a psychologist who secretly infiltrates the private lives of her patients — is still a mystery. But there’s no point in pondering that one, since “a memory is all that is left for you now” that the show has been canceled after just one season. The gypsy is dancing away from us again!

On May 19, Stevie made a surprise appearance at The Troubadour in Los Angeles, performing onstage with One Direction heart-throb Harry Styles. Harry was promoting his eponymous debut solo album, which was released on May 12.

Stevie came onstage toward the end of the show. Harry affirmed to the crowd that he was in the presence of greatness.

“I’m pretty sure that this was going to be up there with one of the best nights of my life. If there was any doubt, I’m pretty sure I’d like to confirm, in my entire life, I never thought I’d be able to say this: Please welcome to the stage, Stevie Nicks.”

Stevie first accompanied Harry on his song “Two Ghosts,” and then the two performed “Landslide” and “Leather and Lace,” serenading each other to thunderous audience appreciation.

You and Stevie Nicks amazing! So happy for you! X pic.twitter.com/zTAePVlgaP

In between July shows with Fleetwood Mac, Stevie headed to Dallas to celebrate Eagles’ drummer Don Henley’s 70th birthday. Naturally, Stevie and Don sang their perennial duet, the 1981 hit single “Leather and Lace.” During the performance, Stevie playfully stood behind Don as he sang his part.

For his platinum jubilee, Don also invited “I am the warrior!” Patty Smyth and fellow Eagles members Timothy B. Schmit and Joe Walsh, who all performed alongside Don at the bash. Next project for Don and Stevie: A new line of anti-aging products! Seriously, we kid. But they really should start one.

7. Stevie is fabulous at Cartier.

In October, Stevie performed at the exclusive Cartier High Jewelry Gala, which took place on Governors Island in New York City. With A-listers, beautiful models, and fashion heavyweights in attendance, the event was nothing short of dazzling. Stevie wowed the crowd with classics like “Stand Back,” “Rhiannon,” and “Landslide” and even shared a rare tweet about the glitzy evening.

8. Stevie appears in The Defiant Ones. On July 9, HBO premiered The Defiant Ones, an acclaimed documentary about Dr. Dre and Jimmy Iovine. Part 2 of the documentary featured a good segment on Stevie’s somewhat secret affair with Jimmy, her producer, which began during the recording of Bella Donna.

Personally, we think the entire documentary should have been about Stevie. After all, what was more defiant than a woman leaving her her rock band with the best-selling record of all time at the height of its global fame…to start a solo career? Well, this girl doubled down, rolled the dice, and turned out a multi-platinum masterpiece — defying the odds! In the midst of the vinyl resurgence taking the world, well, Millennials, by storm, Stevie’s record label Reprise took the opportunity to hone in on this largest group of consumers to issue Rarities 1981-1983, a compilation of tracks from Stevie’s recent Bella Donna and The Wild Heart CD reissues. On April 22, the limited edition vinyl pressing was released on Record Store Day, an event to celebrate independently owned record stores. The album cover featured a gorgeous Wild Heart-era shot of Stevie, taken by the sky…or rather by the late great photographer Herbert W. Worthington, III. (The same shot was used for the limited edition posters pressed for Stevie’s 24 Karat Gold Tour).

10. Fleetwood Mac fans get a pair of ‘Classic’ shows.

In July, Fleetwood Mac performed a pair of stadium shows dubbed “The Classic West” (Los Angeles) and “The Classic East” (New York). Joining the bill were The Eagles, Journey, Steely Dan, The Doobie Brothers, and Earth, Wind & Fire. Each night ended with a fantastic firework display.

The shows were an extension of Fleetwood Mac’s recent On With The Show Tour. But Mac fans will get a brand new set and their fill of the band when it embarks on the so-called “Farewell Tour” in 2018.

Well, there you have it, 10 of Stevie’s biggest moments in 2017. Of course, there were others, but we’ll leave that for the social media boards to debate. Happy New Year to Stevie Nicks fans around the world, and thank you for supporting this site over the years! May the coming year bring you and your loved ones good health and wonderful new memories!