The Other Side of the Mirror is Stevie Nicks’ fourth solo recording, a concept album inspired by Lewis Carroll’s Alice’s Adventures in Wonderland. 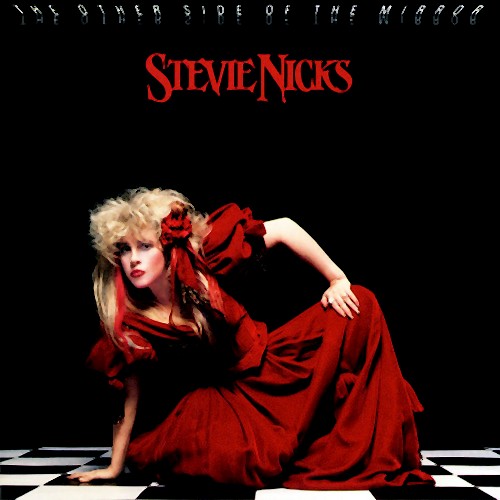 Driven by British producer Rupert Hine‘s keyboard arrangements, The Other Side of the Mirror (1989) features a whimsical sound, a sonic departure from the signature rock sound that characterized Stevie’s earlier solo work. Pianist Bruce Hornsby (“Two Kinds of Love,” “Juliet”) and saxophonist Kenny G. (“Two Kinds of Love,” “Alice”) also perform on the album. It includes a cover of Johnny Cash‘s 1958 song “I Still Miss Someone (Blue Eyes),” which closes the album.

Besides “Two Kinds of Love” and “Alice,” Stevie recorded at least four other tracks with Kenny G, which were not included on the album.

Modern Records released CD, cassette, and vinyl versions of The Other Side of the Mirror on May 11, 1989.* The album debuted at No. 10 on the Billboard Hot 200 Albums chart and produced the single “Rooms on Fire,” which reached No. 1 song on the Billboard Album Rock chart and No. 16 on Pop Singles.

Modern Records heavily promoted the album overseas, which led to Stevie Nicks touring Europe for the first time as a solo artist. As a result, “Rooms on Fire” became an international hit in Germany (#46), the Netherlands (#15), and the UK (#16). The song also reached the Top 40 in Australia (#23).

In Japan, the album included slightly different tracks: the 7″ Remix/Edit of “Rooms on Fire” and the bonus track “Has Anyone Ever Written Anything for You” from Stevie Nicks Live at Red Rocks (1987).

*Some sources list May 9, 1989 as the official release date.