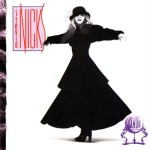 Rock a little, cry a little, a bit of this, a bit of that – Stevie Nicks will not commit to much. She’d rather remain elusive, an enigma, a dreamer whose “problems” add up to so much Southern California angst.

She’s here to tell you, because she knows first-hand, that money isn’t everything. No, love is everything – and nothing. The man of her visions is there, and she will wait. But she can’t wait. She’d do anything for him. But he’s not there. Well, he “is” there, but they don’t communicate. She needs him, but back come only unspoken words. She is so alone, but in her heart she knows he will stand by her.

As Nicks furthers her solo career apart from the triennial offerings of parent group Fleetwood Mac, she continues to be vague, calling in wispy references to water and sky and wind. All answers are somewhere “out there”. Existential pop.

About all that has changed since “When Doves Cry” is that she’s gone from white to black in dress, and her voice has gotten more gruff in parts. Otherwise, backed by her stable of reliable LA session players and augmented by female backup vocals, it’s difficult to tell where the songwriting ends and the production and engineering begin. She uses five – count ’em – producers and an amazing 10 different studios. There are too many musicians and engineers to count.

What’s it all add up to? Rock a little, cry a little… Rock a Little reissue in the works?