Nothing will slow Stevie Nicks down

On the eve of her new concert film, the Fleetwood Mac singer talks new solo material, Trump’s response to COVID-19 and the chances of a ‘Rumours’-era reunion

Nothing will slow Stevie Nicks down. When Fleetwood Mac concluded their year-long world tour at the end of 2019, the 72-year-old singer songwriter decamped to her Santa Monica home with the intention of taking the year off from touring. Like the rest of us, she didn’t expect to be holed-up for quite so long. “I’ve been quarantined solid since March,” Nicks tells NME. “I figured that I’d probably do about ten gigs and then I was just going to work on a miniseries for Rhiannon but then the door slams and we have a pandemic.”

Out of these dark days, Nicks has kept a busy schedule. ‘Show Them The Way’, worked upon remotely with the help of Dave Grohl, is her first single in six years. She has also helped produce 24 Karat Gold The Concert, a spellbinding concert film from the 2016/7 tour of the same name, which in cinemas for two nights later this month featuring staples such as ‘Edge of Seventeen’ and ‘Stop Draggin’ My Heart Around’ alongside unreleased gems and deep cuts.

Whilst a viral TikTok video may have drawn headlines and pushed her song ‘Dreams’ back into the charts recently, the two-time Rock and Roll Hall of Famer had other things on her mind when we caught up with her, including her issues with Trump, the lost ‘Buckingham Nicks’ album and why she is fatalistic if ‘Rumours’–era Fleetwood Mac are to never play together again.

“In a million years, I never thought I’d have two projects coming out within two weeks of each other. It’s been a lot of work over the last two months, let me tell you. I’m pretty excited and really proud of everything. I think the film is the closest anyone is going to get to a real, serious concert until the pandemic is over. And I think the song is ‘right now’ with what’s going on in our country. Our country is so divisive. We have gone back so far. It is very sad and very scary.”

You have been openly critical of the US administration’s response to COVID-19. You tweeted that ‘Nobody is leading us. Nobody has a plan.’ You called it ‘a tragedy’ and ‘a real American Horror Story’.

“You know that our President and his wife contracted the virus? It’s like, ‘wear your mask’, you know? It’s a simple thing to ask. Just wear your mask. Especially if you’re the President of the United States. It’s pretty simple. We’ve been told again and again and again that it’s incredibly contagious. I don’t take any chances. Nobody in my world does. For me, as a singer, if I get it and I get that terrible cough that never goes away; if it attacks my lungs and I don’t have my lung power anymore it would kill me. It would destroy my career.”

Do you feel that Trump been irresponsible?

“I think if you don’t wear a mask you’re irresponsible. I’m very sorry that he got it – I’m not saying anything like that – but he never wears a mask. Nobody in his circle does. And now they’ve all got it. It really proves something to the people in the US who view it as some political thing. Well, guess what? It’s not political. It’s dangerous and it’s contagious. But he [Trump] had to get it to know that? He couldn’t listen to the science? He couldn’t listen to all the doctors who probably said in private, ‘you need to take care of yourself and wear your mask’?”

Why do you think he hasn’t listened to the scientists?

“I think he just thinks he knows better. But what is he going to say now? This is like telling your children to be careful when they go out and then they don’t come home one night. All you can do is tell people and whether they listen or not is up to them. But that’s not my problem. I’m very sorry that they got it. But they knew better.”

You have a reputation for being forthcoming and open in interviews. I presume this is what you’re like in all aspects of your life?

“It’s the only way I can really be. I know that comes from my mum. I just am who I am. I know that sometimes my honesty is a lot for people and that it pushes some away, but if you can’t hear the truth then I can’t really hang out with you!”

In 24 Karat Gold The Concert, you detail difficulties you had making 1983’s ‘The Wild Heart’. You say you were ‘arrogant’ and ‘less of a team player’ than you were on your solo debut, ‘Bella Donna’. Why so?

“‘Bella Donna’ took three months to make. It was the first record in a solo career and I was not stupid enough to waste time and spend too much money. No self-indulgence. Then, after ‘Bella Donna’, I made ‘Mirage’ with Fleetwood Mac. That took a year and we went on tour for about another year. ‘Mirage’ was a big record and had a tonne of singles on it and so, when I came back, I was different. I could not consider myself a cleaning lady and a waitress anymore.”

How did this affect the recording of ‘The Wild Heart’?

“When I walked into the studio I was much more confident. I can call it arrogance or I can call it confidence. It was somewhere in between the two. I was much stronger in my ideas. For example, I wanted to produce. I just wanted to be more involved than I was during the first album. When I look back on that now, that was just me growing as an artist. I didn’t want it all done for me. ‘The Wild Heart’ was different. It needed to be different. Much like how, after ‘Rumours’, we [Fleetwood Mac] made ‘Tusk’ because we didn’t want to do ‘Rumours’ over. Even though the record company said we needed to, we just said, ‘We can’t do it.’”

Was your second album a personal turning point?

“‘Bella Donna’ kicked off my solo career but as I walked away from ‘The Wild Heart’ everybody knew that I had arrived as a solo artist. I was not going to just say, ‘That was fun’ and go back to Fleetwood Mac. I was going to be able to handle being in both bands. When Fleetwood Mac took vacations, I could go and make a solo album and tour. And then go back again. It worked out great for a Gemini: I had two worlds. Never a boring moment.”

Were you ever conflicted about offering songs to Fleetwood Mac rather than keeping them for yourself?

“No, I was never selfish with the songs. If I had ten songs that I had written, I would sit at the piano and play all ten for Fleetwood Mac. I would let them choose because if they chose the songs then they were going to be good. If I tried to shove songs down their throat, they weren’t going to be good. Who they go to is fine by me. It’s never been a problem. It kinda works itself out. The songs that are supposed to be on the record that you’re doing at the time jump out. And the ones that aren’t right for that particular time don’t.”

“Lindsey and I haven’t had any communication since his heart attack. If it’s ever meant to happen, it will”

Thinking of the revelations springing from the #MeToo movement, did you ever experience any difficulties of that kind over the years?

“Honestly… in Fleetwood Mac, Christine [McVie] and I were a force of nature. In the first two months I was in the band, Chris and I made a pact that we would never be in a room full of famous English or American guitar players and be treated like second class citizens. If we weren’t respected, we would say, ‘this party’s over.’ We have stayed true to that our entire career.

In my own career, I didn’t have Christine but I had Lori Nicks and Sharon Celani. My [backing] singers and my best friends. We wanted to be Crosby, Stills and Nash! Sometime we would try not to make my voice louder than theirs, so that we could have that three-part [harmony] going on. I had my girls: the three of us. They were my sound. Together, we were also very much like, ‘don’t mess with us, because we’re really good, we’re talented and we’re really nice women. If you don’t treat us the way we feel that we should be treated we won’t work with you.’”

Was the need for a pact, or strength in numbers, necessary because you witnessed mistreatment, or worse, directly?

“Sometimes I saw women treated in a way that I didn’t think was great. At 72 years old, I am totally behind MeToo. I support all those women, totally. I joined a famous band in 1975. I didn’t have to move to Los Angeles by myself and try to find a job in a band or try to find something to do with music all alone. I didn’t have to do what women who move to LA to be an actress have to do. I had a team behind me immediately. When I was with Lindsey [Buckingham], I had him. I was never out there alone having to talk to producers or men who were going to try and take advantage of me. I’m really lucky. It’s really unfortunate that most women in showbusiness do experience that, but I seem to have skated through it.”

The film features ‘Cryin’ in the Night’ from 1973’s ‘Buckingham Nicks’. This album has never been released in the CD era and beyond. Due to your fall-out are we further away than ever from a release?

Have you heard back from Lindsey since you sent him a note following his heart attack last year?

“The heart attack was serious. All of us in Fleetwood Mac wrote to him and told him that he’d better get well. Being an ex-girlfriend, I wrote more than that. I said, ‘you’d better stay well and you’d take care of yourself’. The same old thing, right? But we haven’t had any communication. It’s OK. If it’s ever meant to happen, it will. If we’re meant to communicate ever again, we will. It’s not happening right now.”

Did he acknowledge the letter though?

“He’s acknowledged it, yeah. He wrote a kind of group letter to us all. None of us have had any communication with him since. You know, it lasted 43 years, so we had a really, really good run.” 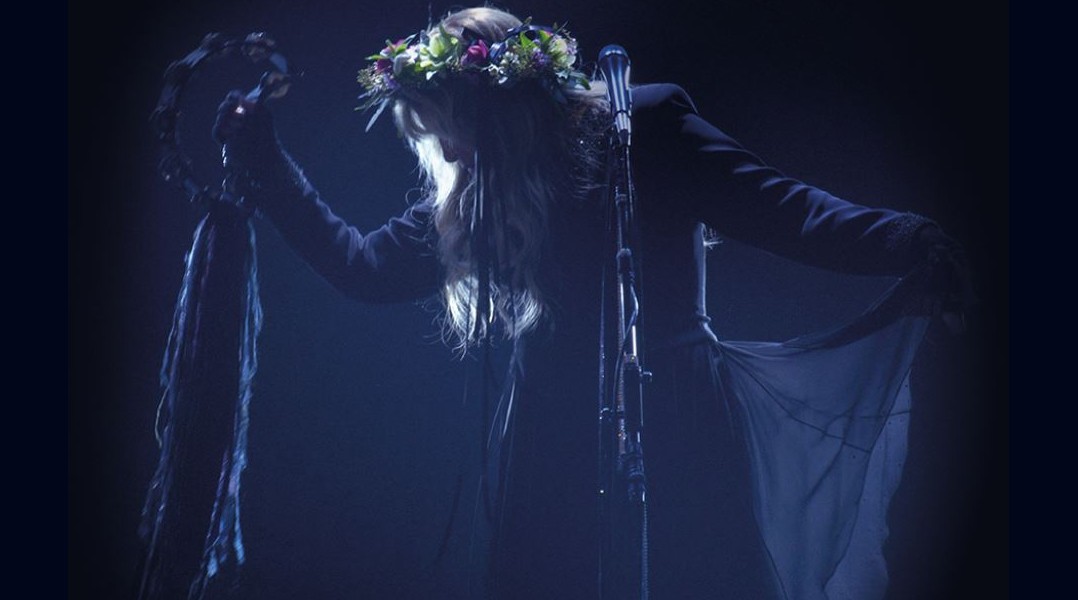