On October 12, Stevie Nicks returned to the stage, performing at the Ameris Bank Amphitheatre in Alpharetta, Georgia. Stevie sang well, despite being set back by a non-COVID respiratory illness earlier this month, which had forced cancellations of her Phoenix (10/6) and The Woodlands (10/9) shows; both shows have since been rescheduled.

Special thanks to Tim G and Kenneth Kyser for sharing your videos!

If Anyone Falls (Kenneth Kyser)

“In the middle of making Bella Donna, my producer Jimmy Iovine came to me and said… Well, first of all, he was by then my boyfriend so it was the devil… He says, ‘Stevie, we don’t have a single.’ And it’s like, who knows even what a single even is especially in 1981? I mean I was like, so what’s a single even though there had been four years, almost five years of Fleetwood Mac? Still, nobody really talked about the single. So it was like, what are we going to do? He goes, ‘I have a plan. You that band that you really want to be in, the other band?’ And I’m like, Tom Petty and The Heartbreakers? He goes, ‘that band.’ I say, okay! He says, ‘Guess what? Tom says he has this song that we just recorded.’ I recorded with him. He recorded together. They recorded together. I can’t even talk tonight — I’m just so excited. And he said, ‘I’ll just give her the song and I’ll sing it with her if she wants.’ And I said, I have never heard a song, I’m going like, I want. I do, I’ll take it, I’m happy. When can I meet him? So we went to the studio like two days later and we sang it together and ‘Stop Draggin’ My Heart Around’ kicked Bella Donna right to the universe. So thank you Tom Petty for that because I probably wouldn’t be standing here tonight. ‘Stop Draggin’ My Heart Around.'”

“Thank you. So the only part of the Bella Donna story I’m going to tell you is this cape is the original on-the-back-of-the-Bella-Donna-cover cover, which is 1981. And it’s in perfect condition.

“So the next song is a song that was written sort of before Fleetwood Mac and a little bit after Fleetwood Mac. It was a like sometimes you write a song that’s not all together at the same time. This particular song was written into parts, but one of the most important parts was about the thing that I do, that I still do if I’m feeling like really upset about just something, and having a little breakdown, or just really angry about something. I take my bed off the bed frame and put it on the floor. And then I buy like beautiful old coverlets and spread little flowers and stuff around it and I make it like it was in the beginning before I joined Fleetwood Mac and I had no money. And it makes me feel like I’m going back to my foundation; I’m going back to who I really am and who I was. So try it sometime.

“Thank you. This is a really old, dear, and very expensive cape too that now has another hole in it.

“So this next song I wrote in 1973 in Aspen, Colorado about a year and half before Fleetwood Mac. I was up there because Lindsey (Buckingham) had gone on the road with the (Don) Everly brother and left me and my friend in Aspen by ourselves with $250. And so we immediately like, you know, networked the entire city and we found friends. So one night, we went to this beautiful house that was like a $10 million dollar house in 1973 and everybody went to dinner. I said, ’cause I had my guitar with me, can I sit on your floor and write a song, and they said, sure. So they left and I had about two hours to just sit and this amazing view and I wrote this song on my Goya guitar. And when it was over and I walked out of the house, I remember distinctly thinking to myself I think this little song is going to be something really big. And since then, this little song catapulted Fleetwood Mac into the universe. And it’s called ‘Landslide.'” 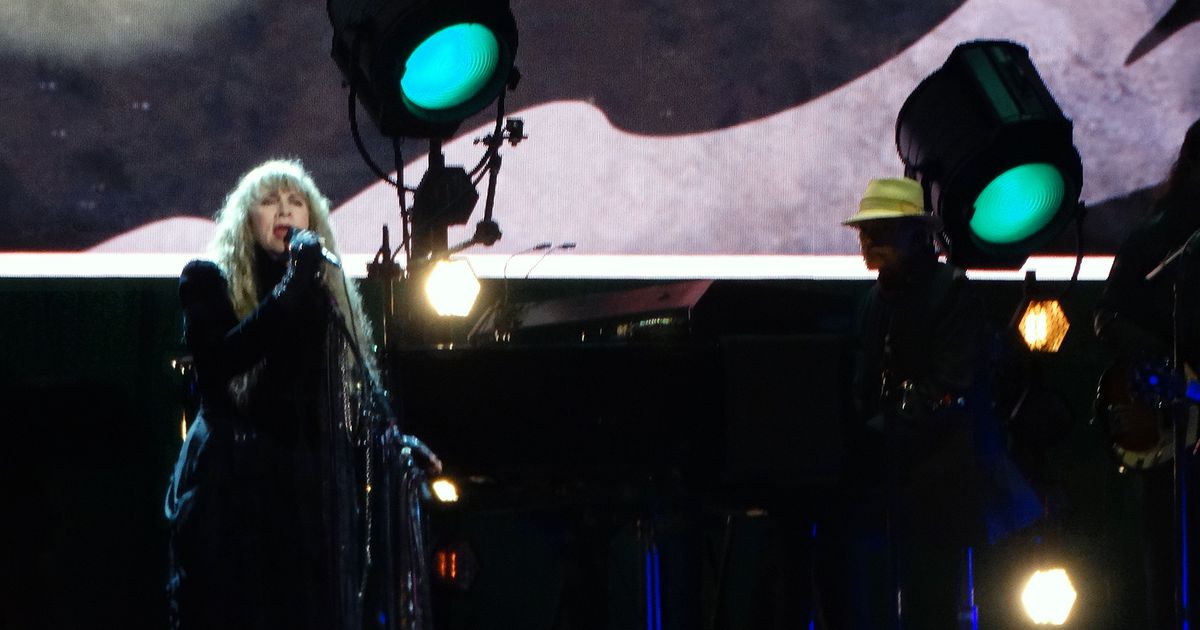 Stevie Nicks remains a singular force of nature (AJC)
Stevie Nicks finished up “Bella Donna” at Ameris Bank Amphitheatre Wednesday night and proudly showed off her cape to the sold-out crowd of 12,000 fans. “It’s the original cape from the back of the album 40 years ago,” she said. “It’s in perfect condition.”