Buckingham Nicks is an engaging listen and served as a proving ground for both artists’ songwriting chops. —AllMusic 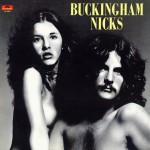 Buckingham Nicks is Stevie Nicks and Lindsey Buckingham‘s first album as recording artists. Released in September 1973, the album features 10 songs, including Nicks’ “Crying in the Night,” Races Are Run,” “Long Distance Winner,” and “Crystal,” the latter of which Fleetwood Mac re-recorded for its self-titled 1975 album. The album also contains “Frozen Love,” the song that Mick Fleetwood heard while visiting producer Keith Olsen at legendary Sound City studio, where Buckingham Nicks was recorded.

Despite the duo’s hard work on the album, Polydor Records was dissatisfied with the results and felt that the album “lacked imagination,” according to producer Keith Olsen. Under contract, Polydor Records reluctantly issued Buckingham Nicks and released the singles “Don’t Let Me Down Again” and “Crying in the Night (remix).” But neither song was able to garner any significant radio play, and more importantly, boost album sales. Buckingham and Nicks promoted the album with a national tour, but Polydor dropped the duo from the label because of low album sales.

Buckingham and Nicks currently own the recording rights to the album, but they have chosen not to reissue it on CD at this time. In 1998, Nicks included “Long Distance Winner” on her retrospective Enchanted: The Works of Stevie Nicks, the first and only time a Buckingham Nicks track has been digitally remastered for a commercial CD release. Other Buckingham Nicks songs “Crying in the Night,” “Stephanie” and “Frozen Love” have appeared on promotional, radio-only CD releases. 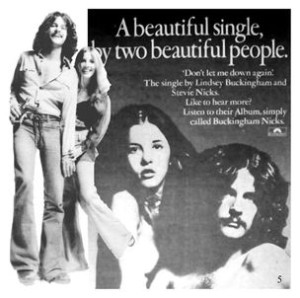