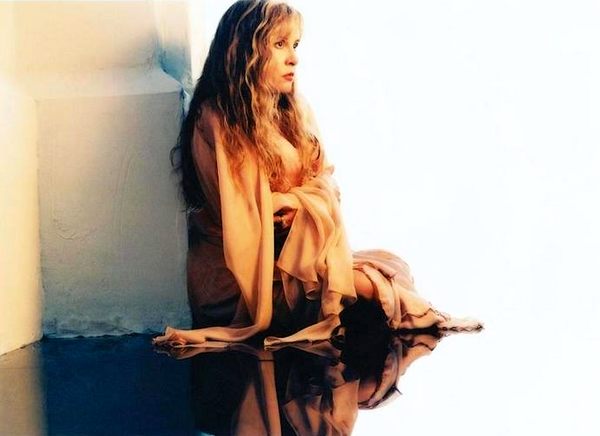 Stevie Nicks is ready for ‘Trouble’

Stevie Nicks is enjoying a rare moment of quiet. It’s a comfortably warm February afternoon in her Los Angeles home, and she is taking a brief breather before diving into what she describes as the “happy madness” of promoting Trouble In Shangri-La (Reprise, May 1), her first solo collection since 1994’s Street Angel.

“Even after all of these years, this is the hard part — living through that period of time between the day you finish a record and the day the world gets to hear it,” Nicks says, her voice brightening as she adds, “but I’m so content with these songs. I’m more itchy for people to finally hear them than anything else.”

And with good reason. Trouble In Shangri-La shows the sometime Fleetwood Mac siren in her finest musical form since her 1981 solo breakout, Bella Donna.

“In many ways, this album brings me full circle,” Nicks notes. “There are a couple of songs I’ve been holding on to since that era, waiting for the right context to bring them out. Also, there was an accumulation of time and life experiences — and songs — reminiscent of that period.”

Despite a diverse roster of producers — including Sheryl Crow, John Shanks, and Pierre Marchand — Trouble In Shangri-La boasts cohesion in style and structure as it strikes a balance between Nicks’ signature rock poetry and concise, radio-conscious pop hooks. The artist credits a renewed confidence in her songwriting as the driving force in the album’s direction.

“I remember asking my dear friend Tom Petty to work with me on some songs,” Nicks says. “I wasn’t feeling my best; I was unsure about a lot of things. He said, ‘No. You’re a premier songwriter. You don’t need anyone to help you with your songs. Do it yourself.’ It was the jolt I needed.”

Petty isn’t the only musical figure with such high regard for Nicks. Trouble In Shangri-La is brimming with high-profile guests. Dixie Chicks belter Natalie Maines harmonizes on the twangy midtempo rocker “Too Far From Texas,” while Macy Gray weaves her distinctive purr into the atmospheric shuffler “Bombay Sapphires.” Sarah McLachlan lends her voice to the lilting, set-closing ballad, “Love Is.” The common denominator among such seemingly disparate guests? Each cites Nicks as a prime musical influence — something that tickles her.

“OK, so now I’m ‘Mama Rockstar,'” Nicks says with a giggle. “It’s cool. Actually, it’s great. I take pride in knowing that people have benefited from the road I’ve traveled. We’ve had a wonderful time bonding.”

No recent bond has been deeper or stronger than the one Nicks has forged with Crow. The pair has been gradually developing a friendship for several years, but Nicks says the ties have become “unbreakable” since the two collaborated on five Shangri-La songs.

“First, Sheryl’s brilliant,” Nicks says. “She’s an amazing songwriter, singer, and musician. But she’s also someone who gets it. She understands the life of a woman in rock’n’roll. There’s no room for playing games with her or saying, ‘You don’t understand what I’m going through.’ She understands, and that’s brought us closer than I can explain.”

For Crow, connecting with Nicks is something she tries not to “get too deep into my head about,” she says. “She represents such a huge chunk of my life that it’s almost unreal to be in the same room with her.”

Still, Crow notes that there was an instant ease in their relationship — both in and out of the studio. “Stevie’s just so real, so completely open as a person,” she says. “And as an artist, she continues to work hard. Sometimes you meet your heroes, and you discover they’ve stopped growing or have gone past caring about what they do. Stevie’s still so vital. She’s still looking to try new things.”

Nicks and Crow both point at the “Shangri-La” highlight “Sorcerer” — a song the pair co-wrote and on which Crow lends guest vocals and guitars — as an example of their successful experimentation.

“Sheryl challenged me to explore different areas of my voice,” Nicks recalls, noting the soulful falsetto that she reaches during the song’s initial verses. “It was fun to do, and it wound up working so well within the song’s arrangement.”

Adds Crow, “Stevie’s an incredible singer. She approaches music in a such a unique manner. It would be easy for her to just stick to the same old thing, but she’s clearly not content to do that.”

In addition to “Sorcerer,” Nicks notes the Crow composition “It’s Only Love” as a personal favorite. “It’s a song that I love to sing,” she says. “I’m hoping that it will be part of the set for the tour.”

Touring is a key component of the Shangri-La marketing strategy. But don’t expect Nicks to drench the set with songs from the new album. “I learned an important lesson back during the first Rumours tour with Fleetwood Mac,” she says. “You can’t shove new songs down your audience’s throat. You can do three or four at the most.

“On that Rumours tour,” Nicks adds, “we did most of that album, and people didn’t want any part of it. They want familiarity. They want the comfort of songs that feel like old friends. You can’t exploit your fans by forcing them to embrace songs they don’t know yet.”

Nicks may offer a blend of classics and new material on her U.S. tour planned to run from mid-June through September. But in a “fair trade-off,” she is planning to perform much of Shangri-La during a showcase in Los Angeles shortly before the set’s release.

“This record is clearly from the heart — and it shows her as a fresh, vital artist,” Reprise executive VP Rich Fitzgerald says. “It’s the record her die-hard fans waited for, but it has the potential to draw new admirers.”

The label will begin working two singles from the project at radio in early April. Triple-A, mainstream rock, and classic-rock formats will be served the guitar-charged “Planets of the Universe,” while pop and modern AC will be offered the sweet, string-laden “Every Day.” A video clip for the latter cut is being planned for production in March.

Nicks’ Web site, nicksfix.com, will offer streaming samples of “Every Day” in late February/early March. Guest appearances on The Late Show With David Letterman and The Rosie O’Donnell Show are confirmed to air around the album’s release, while other shows — along with several special tie-ins with VH1 — are soon to be locked in.

Label enthusiasm seems to be running high, but Nicks admits that she isn’t the most competitive artist. “I’m not willing to kick and scratch to win,” she says. “That doesn’t mean that I don’t want to reach the largest possible audience. I’m one of the hardest-working people you’ll meet, but I’m just not driven by commerce. I make music and want people to hear it. It’s that simple.”

Nicks — who is managed by Sheryl Louis at the Howard Kaufman Agency and whose songs are published by Welsh Witch/Sony Songs (BMI) — is philosophical about releasing an album at a time when the music business continues to be dominated by teens.

“If you’re in it for real, then that’s what counts,” she says.

Here is the track listing of Stevie Nicks’ Trouble In Shangri-la:

“Too Far From Texas”
Produced by Mike Campbell, Sheryl Crow, and Stevie Nicks
Written by Steve Booker and Sandy Stewart

“That Made Me Stronger”
Produced by Sheryl Crow and Stevie Nicks
Written by Stevie Nicks, Scott F. Crago, and Timothy Drury

“Love Is”
Produced by Pierre Marchand
Written by Stevie Nicks