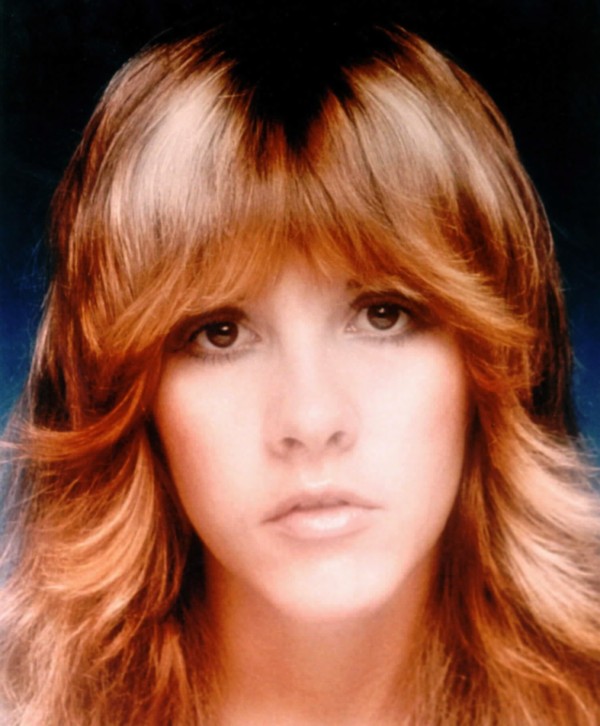 A pineapple scent wafts through Stevie Nicks’s Maui house. Outside, the Pacific Ocean laps at volcanic rocks, and inside, New Age music fills the air. Just when you get the feeling a unicorn is about to saunter into view, Nicks opens her mouth and starts talking about menopause. “It drives people crazy when I bring it up, but I think it’s important,” she says.

The 58-year-old Fleetwood Mac star has always been more candid than your average witchy woman. The singer of such stone classics as “Dreams,” “Rhiannon” and “Edge of Seventeen,” she doesn’t mind answering questions about her past vices (coke: yes; heroin: hell no) and her past consorts (including bandmates Lindsey Buckingham and Mick Fleetwood, who owns the house across the street). During rock’s golden age of excess, she was a top-ranking diva, demanding the presidential suites at hotels and traveling by private train. She’s even been the star of two episodes of Behind the Music, but curled up on the sofa today, the ethereal one seems more or less at peace.

“This is my vacation time,” she says with a laugh. Some vacation — she’s been assembling Crystal Visions … The Very Best of Stevie Nicks, a CD/DVD solo-career retrospective. In May, she’ll head out on tour. Perhaps, we ask hopefully, there’s one last Fleetwood Mac reunion in the works? “I can’t tell you that,” she demurs. “But the doors are never closed … ”

We would have been working on Rumours in Los Angeles. An average day would have been getting up and going to the studio, pretty much six days a week. It was fun. I enjoy the process of recording. I’d have my special chair, my special coffee cup — I’m very at home there. And every day somebody brings something: Somebody brings fishnets and puts them over the lamps, somebody brings pillows, and then Mick Fleetwood brings a statue and pretty soon there’s a pair of giant African elephant tusks bracketing the soundboard.

What is “Gold Dust Woman” really about?
Aronowizz, Kingston, NY

The “Gold Dust” thing came from a street in Phoenix, where I grew up, which is called Gold Dust Lane or Avenue or something. “Gold Dust Woman” was kind of a premonition of the beginning of the drug world. When I say, “take your silver spoon and dig your grave” it sounds like I was right in the middle of the drugs, but I really wasn’t; there weren’t any drugs around Fleetwood Mac for quite a while. But it was a premonition of getting famous really fast and being thrown into a whole culture. “Gold Dust Woman” was just me looking around and going, This is a pretty scary society down here, and boy, I hope we make it.

Have you ever watched the Fleetwood Mac Behind the Music? Is there any part of it that just makes you cringe?
VanMan1969, Reading, MA

I think both of the Behind the Musics — the Stevie Nicks and the Fleetwood Mac one — are really good. I’m proud of those shows. And today, if they’re on, I’ll watch them and I’ll cry! They should be shown to all the girls going into rehab — just watch my Behind the Music episodes and learn what not to do!

Was Lindsey Buckingham the great love of your life?
Epress3x, Amarillo, TX

“Great love” connotes a lot of things. He was the great musical love of my life. I can compare it to Johnny Cash and June Carter Cash in that movie — they loved each other for two reasons. You can love somebody because you fall in love with them, but you also love what they do. And that’s a double whammy.

Do you have any tips on conducting an office romance?
Illisimo5673, Altamonte Springs, FL

Your office is my road; it’s all the same thing. And I think that it never works and will always, always backfire. Those relationships are over once the intensity of the moment is over. And then somebody gets hurt. It never works.

Which lyric are you most proud of?
Lbubbrs, Los Angeles

That’s hard. Any song of mine that goes out into the world I’m pretty proud of. Hmmm … I’m thinking about a song called “Storms,” off Tusk. “Every night that goes between/I feel a little less/As you slowly go away from me/This is only another test/Every hour of fear I spend/My body tries to cry/Living through each empty night/A deadly call inside.” Those lyrics came out when I was really hurting.

Is it true that Lindsay Lohan is going to play you in a movie?
Empier81, Lompoc, CA

Lindsay Lohan thinks she is going to play me! But what the hell movie does she think she’s talking about? There is no book, there is no screenplay, there is no movie. There is never going to be a movie made without me, because it’s never going to be the story of me. Even though a lot has been written about me, the fact is nobody actually has a clue to what my life was really like. So good luck, Lindsay.

What’s the worst rumor you’ve ever heard about yourself?
Julian.George, Madison, WI

Probably it would be from the drug years, when people thought I was doing heroin. I never did. You can do a lot simpler drugs than heroin and still get in trouble.

What was the high point of Fleetwood Mac on-the-road excess?
Ayteemit, Manchester, NH

The way we traveled. We had a big 737 commuter jet done up beautifully on the inside — it’s what professional basketball players rent. We had that for a year and a half. I still fly on a jet, but my jet is way littler these days. With Fleetwood Mac everything was huge, and it still is today. We always stay in the best hotels. I get the presidential suite over everybody, because I demand it.

Is it true your performance of “Don’t Stop” made Bill Clinton cry at the 1993 presidential inauguration?
Nilespine, Tripp, SD

Well, if it did, I don’t know about it, because I’m as blind as a bat and he was far enough away from me that I doubt I could have seen it. However, I do know that he loved “Don’t Stop,” and he dreamed of using it in a campaign long before he ran for president. He was riding in a cab somewhere — this is the story that we got — and he heard that song and he said, “If I ever run for something big I’m going to use that as my song.”

Do you still have a ballet studio in your house? When was the last time you did the splits?
Perry.Gold, Tucson, AZ

In my house in Phoenix, I do maintain the ballet room that I’ve had since 1981. I can still do a split, not a problem, because I’m limber. People who can do the splits can always do the splits.

Have you ever attended the drag tribute Night of a Thousand Stevies? and When did you realize you had become a drag icon?
Nandoor1, Jackson, OH

I was on a plane coming from the Super Bowl, and one of the stewards was telling me that he was a big fan and that he went to Night of a Thousand Stevies every year. He was six-foot-five and telling me all about his dress and his fantastic boots. Whoa! I still haven’t gone, but I’ve seen footage, and I have to say, I couldn’t be more flattered!

Have you ever been tempted by Scientology?
Lenhub88, Bucks County, PA

I have never been approached. I don’t really get it. I think it’s a little weird.

You recorded 1994’s Street Angel when you were addicted to Klonopin. What did you think when you first heard it after you got out of rehab?
Pillowpop4, Gaithersburg, MD

I went back in and tried to fix it! It wasn’t that it wasn’t good, it was just, if you’re taking a lot of tranquilizers everyday, it only makes sense that the music will be verrry tranquil. So I tried to fix it, which is kind of like trying to redo a house: You end up spending way more money than if you had just burned it to the ground and started over. It wasn’t fixable.

What advice would you offer to Britney Spears and Lindsay Lohan as they go through rehab?
Starz431, Providence, RI

I’m more worried about Britney than Lindsay, because I think Lindsay is a serious actress, and that is going to be her saving grace. The only thing I could ever say is — I look over film footage and interviews for the Crystal Visions DVD, and I can totally tell when I’m high. There are a couple of videos that are really good — except that I was high. I’m sorry I let that happen. I ask myself, “Stevie, could you have just, while you were filming that video, not done any cocaine and not drank and not smoked pot? For those three days, could you have laid off of it so you could have looked great?” But I didn’t, and now I’m very sorry. If I could have gotten it together a little more I would have had a better career. I would have made a couple more great albums, I would have painted more pictures. You are sorry later … that’s what I would tell them.

What happens to us when we die?
Ulee43, Port St. Lucie, FL

I absolutely believe that there is an afterlife. I’ve had one afterlife experience where I did go to that other place. I fell off a horse. I was riding with a bunch of people — I didn’t even hit the ground, really; my brother jumped off his horse and caught me mid-flight but it scared me so bad that I lost consciousness. And I felt myself go up into this really light place. I could see the horses around me and hear the riders’ voices. I felt like I was rolling down a mountain, starting to go really fast … Then I opened my eyes. But for a minute I felt like I really had a choice to make, to come back. So I think there is an afterlife, and it’s a good place.

Do you have any vices these days?
Alex.neric, Lincoln, NE

Since I got out of rehab in 1994, I’ve stopped doing serious drugs. And then as menopause touched my life, I stopped even having a glass of wine. I don’t drink at all. I find that I’m spacey enough on my own that I don’t need to be drinking or smoking; it just doesn’t fit into my life anymore. I’m very glad, because it’s not like I’m fighting every day to not do drugs. They’re just gone.

Is it true you keep your feathers and lace in a climate-controlled facility?
Stagehanddan, Fenton, MS

I keep all my stage clothes in cases, and they go into storage in temperature-controlled rooms. Chiffon lasts forever if you take good care of it!