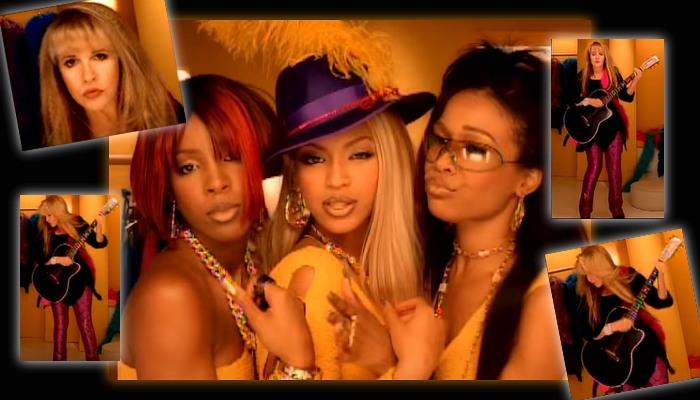 It’s been 15 years since Destiny’s Child recorded “Bootylicious,” the Billboard No. 1 single that sampled the guitar riff from Stevie’s 1981 classic “Edge of Seventeen.” The track went on to sell 485,000 units to date, with more than 36.7 million online streams and a radio audience of 974 million, according to Nielsen Soundscan. The key sample proved to be a goldmine for Nicks, who received 50% of the songwriting royalties. Here’s a look back on the song and the making of its music video (see the video clip at the bottom of the page).

Before 2001, the term “Bootylicious” was mostly associated with Snoop Dogg, who so eloquently combined the words “booty” and “delicious” on his verse in Dr. Dre’s “F— Wit Dre Day” in 1993. But that all changed when Beyoncé Knowles, Kelly Rowland, and Michelle Williams started working on Survivor, Destiny’s Child’s third album that would cement them as one of the decade’s best pop trios.

By May 2001, they had reclaimed the word “Bootylicious” on one of the album’s touchstone tracks that featured the phrase “I don’t think you ready for this jelly” and a Stevie Nicks’ guitar sample. Fifteen years after it was released on May 20, 2001, some of the track’s key players remember how it all went down.

“I had this track that had a Stevie Nicks’ [1981 hit “Edge of Seventeen”] guitar loop on it,” producer Rob Fusari, who has since worked closely with Lady Gaga, told EW in an interview earlier this year. He said hip-hop group Bell Biv Devoe wanted the song, but he gave it to Destiny’s Child’s manager and Beyoncé’s father, Mathew Knowles, instead.

Once they agreed to use it, Fusari and Beyoncé began “talking about lyrics and concepts back and forth over the phone,” he said. “She was out of the country at that point, but she had the ‘Bootylicious’ concept in her head. That was totally her. She knew what she wanted to say. It was very urban pop angle that they were taking on the record.”

The group recorded the song in Houston, Texas at SugarHill Studios, where they had worked for years. “We cut ‘Bootylicious’ in one 14-hour day,” SugarHill’s president Dan Workman, who worked as an engineer on the album, said. “Beyoncé was sitting sideways on the effects rack behind me in the studio and we’d play her the track over and over while she wrote. We wrote the song in one sitting right there in the studio, and she and Kelly would tap each other in singing the parts and figure it all out.

“I remember Mathew calling me that day asking what we did and I said, ‘Well we did a song called “Bootylicious” and the phone was just silent on the other end, he was like “Bootylicious”?! Oh no no no!’ I was like, ‘No you don’t understand. It’s this great female empowerment song it’s going to be fantastic.’ Sure enough it was on the radio within a few months and it was very thrilling to see that happen.”

But Mathew Knowles went back and forth with Fusari about the track, debating whether to pull out the Nicks sample, which proved to be a fiscal splurge. “Initially the loop I wanted in the track was from ‘Eye of the Tiger’ which is the same riff,” Fusari said. “I didn’t have the vinyl to handle it, but I did have the Stevie Nicks record. Needless to say, Mathew was adamant about not replacing that loop because I knew it was going to come with a significant sample fee and a copyright that Stevie Nicks would want and sure enough it did. It was 50 percent of everything. He said, ‘The record’s perfect the way it is,’ so I didn’t get to change that. We kind of had a pissing match in terms of what the record needed.”

The sample worked to their advantage when the iconic Fleetwood Mac singer made a cameo in the “Bootylicious” music video, directed by Matthew Rolston. Nicks plays herself in a dressing room, strapped with a glittery guitar and magenta flared pants.

Fans and critics agreed when the track hit No. 1 on the Billboard Hot 100. The song went on to sell 485,000 units to date, has been streamed more than 36.7 million times, and had a radio audience of 974 million, according to Nielsen Soundscan.

“When I was cutting that song, I definitely had the sense of ‘Oh my gosh, this is one of those moments.’ I knew it was going to be a hit record,” said Workman. “I’ve had that maybe twice in my career. It was just greatness.”