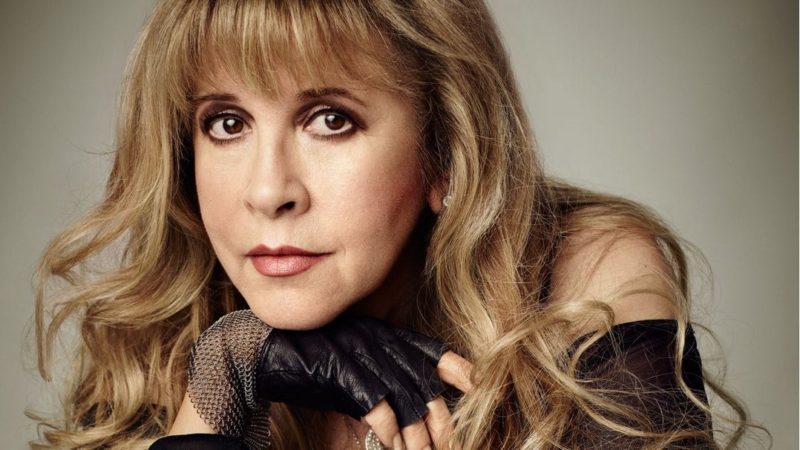 “They like to wrap her in velvet…” The unmistakable fashion icon.

Who are Stevie’s fashion influences?
Janis Joplin, Jimi Hendrix, and Grace Slick served as both musical and style inspirations for Stevie’s look. She derived some of her gossamer style from ballet and dance.

Who designs Stevie’s clothes?
Stevie has worked with Los Angeles designer Margi Kent for many years to balance style with comfort for her stage outfits.

Where does Stevie get her boots?
For her trademark platform boots, Stevie has worked on custom designs with Mardiros Vartanian, Maia Mazia, and the late Pasquale di Fabrizio.

Why does Stevie occasionally wear sneakers onstage?
At her January 3, 2000 show in Anaheim, CA, Stevie told the audience that she broke her foot in Las Vegas, presumably around December 31, 1999. This was the first time she started to wear black platform sneakers onstage instead of her trademark platform boots. Many years passed before she felt comfortable enough to wear her boots for an entire show.

What is Stevie’s natural hair color?
Stevie is naturally a brunette.

Does Stevie ever wear pants?
Yes. Stevie occasionally dons a fabulous pair of pants (usually in black) at shows and special events. In her early years, she would wear jeans from time to time.

Where can I buy Stevie-inspired clothing?
For clothes in the style of Stevie Nicks, try searching on Etsy for handmade and vintage Stevie-Nicks-related items. For Stevie’s iconic gold triangle and crescent moon pendants, try Camias Jewelry Designs. Visit the Shop page for other Stevie-inspired items.

Why does Stevie wear a tophat onstage?
The tophat is part of Stevie’s stage costume, which she usually dons when Fleetwood Mac performs “Go Your Own Way.” Stevie found her first tophat while antique shopping in Buffalo, New York, during the Rumours tour. She has also worn a variety of other hats throughout her career.

How does Stevie feel about being portrayed as a goat on the show South Park?
Knowing that the animated show poked fun at many celebrities, Stevie thought it was hysterical. “I got kidnapped by the Afghanistan people and they sent the army in to get me. Yes, I was a little goat in a cape. But who cares? It was hysterical. The fact is, they sent the whole army in to get me!” (KBCO Radio, 2011).

“What do you love to do outside your world…” Stevie’s many interests.

What does Stevie do in her spare time?
Stevie enjoys a wide variety of interests outside her career. Some of these include drawing, painting, crocheting, reading, writing in her journal, listening to new music, visiting with friends and family, attending musicals, traveling to places near the ocean, and watching daytime soap operas.

Does Stevie drive?
No. Stevie drove cars in the past but does not drive today. In 2014, during Fleetwood Mac’s On With The Show Tour, Stevie mentioned that she used to drive a “cherry red Corvair.”

She also notoriously drove a Toyota Corolla with no reverse gear. This was the car that she and Lindsey Buckingham drove to move to Los Angeles in the early 1970s. According to Stevie, Lindsey had nicknamed the car “The Pocket,” which referred to the musical expression “being in the pocket,” or playing music in tempo.

Who are some of Stevie’s favorite authors?
Stevie has drawn tremendous inspiration from classic literary works. Some of her favorite authors are Edgar Allan Poe, Oscar Wilde, Charles Dickens, Taylor Caldwell, Nathaniel Hawthorne, John Keats, and Walt Whitman. Stevie has alluded to their works in many of her songs, such as “Rooms on Fire” (Wilde’s The Picture of Dorian Gray), “Kick It” (Wilde’s The Happy Prince), “Running Through the Garden” (Hawthorne’s Rappaccini’s Daughter), and “Annabel Lee” (Poe’s 1849 poem set to music).

What kind of music does Stevie like?
Stevie enjoys music from many different eras and genres and stays current with new music. Growing up, she enjoyed singing along to songs of R&B acts, such as Diana Ross and The Supremes, Aretha Franklin, and The Four Tops. As a teenager and young adult, she was fond of the bands that emerged from the mid-1960s psychedelic rock scene. Artists from that time included Bob Dylan, Jefferson Airplane, Jimi Hendrix, Janis Joplin, Led Zeppelin, and Santana, among others. Tom Petty & The Heartbreakers is her favorite rock band.

Why does Stevie twirl on stage?
Stevie enjoys ballet and dance. She once wanted to be a ballerina but focused on rock and roll instead. At her Phoenix property, she had built a ballet studio where she could practice ballet and dance.

What is Stevie’s art background?
Stevie is a self-taught artist with no formal training in art. She started drawing angels when her friend Robin Anderson was stricken with leukemia in 1982. Stevie’s art is greatly influenced by German artist Sulamith Wülfing, whose works feature depictions of angels.

What does Stevie think of social media?
Stevie has warmed up to social media over the years. During the 2020 pandemic, she shared more photos and comments online via her social media team. But Stevie generally prefers traditional means of communication, such as writing letters and cards and speaking with people in person or on the phone.

Does Stevie have any pets?
Yes. Stevie loves animals and has cared for many pets over the years. She once had Afghan Hounds named Branwen and Ginny, a French Poodle named Molly, and a pair of Chinese Crested Yorkshire Terrier mixes named Sara Belladonna and Sulamith Wülfing. She once described Sulamith as her “life-partner puppy.” Born in 1998, Sulamith passed away at the age of 17 in 2016.

On October 6, 2016, Stevie introduced her new puppy Lily, her “little tree fairy,” to the world on The Late Show with James Corden. Stevie wrote about Lily in InSTYLE.

What kind of bird is on the cover of Bella Donna?
The bird featured on the cover Bella Donna is a cockatoo named Maxwellington. It belonged to Stevie’s brother Christopher.

“Do it for the world…” The charitable side of Stevie Nicks.

What charities does Stevie support?
Stevie devotes much of her spare time to philanthropy, supporting many important causes. She has done significant work with the Arizona Heart Foundation, which her late father Jess Nicks also supported, and City of Hope, a cancer research and treatment center in Duarte, California (near Los Angeles).

In 2006, she founded the Stevie Nicks Soldier’s Angel Foundation, inspired by her many visits to military hospitals in Bethesda, Maryland.

What is Stevie’s political affiliation?
Stevie has supported democratic candidates in the past, most recently Hillary Clinton in 2016 and Joe Biden in 2020. But she generally keeps her political views private.

“Has anyone ever written anything for you…” The most noteworthy books about Stevie Nicks.

What are some good books written about Stevie?
The best books about Stevie Nicks are the ones with first-hand accounts, interactions, and interviews with her. Some of these include:

“The book is called The Wild Heart. The book is really…we call it ‘The Book.’ It’s a lot of poetry, it’s some journalistic stuff, it’s a lot of the actual nights of recording of The Wild Heart and the experiences that happened during that 2-3 year period. There are some things from my Fleetwood Mac stash of 10 years of writing. That part of it, the real essence of that, isn’t in this book because that’s a book in and of itself. It’s my life, and it’s very honest. The names have been changed, but it’s very honest.”

For unknown reasons, the book was never published. Stevie has since changed her mind about publishing a book about her life to protect the privacy of the people close to her.

“Rumours are started…” The crazy, unusual, and usually false narratives about Stevie Nicks.

Is Stevie a witch?
No! The rumor probably originated from one or more of the following things: Stevie’s song “Rhiannon,” which she has described as being about a Welsh witch; Stevie’s past Halloween costumes as a witch; and Stevie’s preference to wear primarily black clothing onstage. Stevie has publicly stated many times that she is not a witch. During the early 1980s, Stevie stopped wearing black clothes for a short period of time because the rumor “scared” her. In 2013, Stevie acquiesced to the silly witch rumors by appearing as “The White Witch” on Season 3 of American Horror Story: Coven.

Is the rumor about Stevie paying someone to blow cocaine up a certain orifice true?
No! In 2001, Stevie emphatically denied the rumor, telling Q magazine: “You know, I heard that too. But of course that never, ever happened. That is an absurd statement. It’s not true. Maybe that nasty rumour came from the fact that people knew I had such a big hole in my nose, which of course didn’t stop me from doing cocaine one little bit.”

Did cocaine use cause a hole to burn through Stevie’s nose?
Possibly. Cocaine use may have been a contributing factor, but the actual hole in her nasal cartilage was allegedly caused by the acidity from aspirin. Stevie used a liquid solution of aspirin to treat severe headaches.

Is Stevie gay?
No! Stevie identifies as heterosexual and dates men. Her songs lyrics (i.e. using the pronouns “she” and “her” in place of herself and the names of female subjects, such as “Rhiannon,” “Sara,” and “Alice”) have sometimes led to this misconception. In 1990, Stevie set the record straight, so to speak, telling Us Magazine that she “loves men too much.” But Stevie has been open about her support for the LGBTQ+ community, giving her blessing to New York City’s long-running Night of a Thousand Stevies, a drag show tribute to her.

Is it true that Stevie believes she’s the incarnation of Marie Antoinette?

Yes. The story originates from Stevie’s inability to tilt her head back comfortably. “When I was little, my ballet teacher brought this to my attention — that I could not put my head back — and we came to the conclusion that I must have been put to death in a previous life, like Marie Antoinette. It’s weird, this reflex. Like when I go into the beauty parlor, I can’t put my head back in the sink for a shampoo.” (Us, 1997)

Boyd, J. and Holly George-Warren, H. (2014). It’s not only rock ‘n’ roll: Iconic musicians reveal the source of their creativity.

Caillat, K. (2012). Making Rumours: The inside story of the classic Fleetwood Mac album.

Goldberg, D. (2008). Bumping into geniuses: My life Inside the rock and roll business.

This page is inspired by the work of C.L. Moon, who created the original Stevie Nicks FAQ.